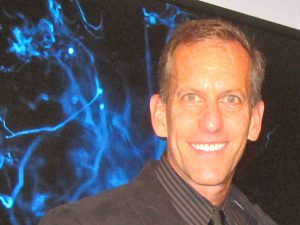 Michael I. Latz is a research biologist in the Marine Biology Research Division and the Center for Marine Biotechnology and Biomedicine at Scripps Institution of Oceanography, University of California, San Diego. His main research interest is the bioluminescence of dinoflagellates. He is interested in the ecological role of bioluminescence, the cellular regulation of light emission, and the applications of bioluminescence as a tool in oceanography, engineering, education, and public outreach. He also works with local conservation groups in the Caribbean to better understand the ecosystem dynamics of bioluminescent bays, spectacular but rare ecosystems that exhibit bright bioluminescence throughout the year.

Dr. Latz received his B.S. in zoology from Duke University, where he first became involved in research. He studied luminescent camouflage behavior as a graduate student at the University of California, Santa Barbara, where he obtained his M.S. and Ph.D. degrees in marine biology, specializing in neurobiology. He completed postdoctoral research at UC Santa Barbara, then worked as an associate research scientist at the Chesapeake Bay Institute of The Johns Hopkins University. He joined Scripps Institution of Oceanography in 1991.

Dr. Latz is a member of the American Society of Limnology and Oceanography.

Lectures by Dr. Latz on bioluminescence:

Zoom talk about the bioluminescent red tide of 2020, to the San Diego Natural History Museum.

Zoom talk about the bioluminescent red tide of 2020, to the Birch Aquarium at Scripps.

To learn about Dr. Latz’s journey from a kid at the beach to marine biologist, watch this video
about his presentation to the Ocean Institute.

I was born and raised on suburban Long Island, New York, just a few miles from the beaches on the south shore where I spent many summers. I was always interested in the ocean but as a high school student didn’t have a strong science education or any teacher role models. I liked biology, so I chose Duke University because of its strong pre-med program and spring semester program at the Duke Marine Laboratory on the coast of North Carolina. Despite originally being a card-carrying member of the pre-med society, I became hooked on marine biology after participating in a semester at the Duke Marine Lab my junior year. When I became heavily involved in research at the Marine Lab, I gave up serious interest in medical school. I graduated with a B.S. with Distinction in Zoology because of my independent research project at the Marine Lab, publishing my first paper on my thesis research. Now motivated to pursue studies in marine biology, I immediately continued on with graduate school at the University of California Santa Barbara, receiving a Ph.D. degree with an emphasis in Neurobiology studying the physiological control of bioluminescence camouflage behavior in a deep sea shrimp. I stayed at UCSB for another four years as a postdoctoral researcher until I was ready to leave and confront the real world on my own.

I had always been interested in the ocean, probably from spending my summers at the beaches of Long Island, but I never took it seriously as a career. I remember going to a career night while in 9th grade and hearing an oceanographer talk about career opportunities as a government oceanographer. Soon after I took a summer course called “Oceanography” in which we visited different shoreline habitats on Long Island and tried to do experiments in a sweltering non-air conditioned classroom. I loved it! It wasn’t until my undergraduate experience at the Duke Marine Lab, where I participated in a spring semester program in marine biology, that I had a healthy and positive experience and developed my love of research. Nothing was more natural than continuing directly into graduate school.

When I started grad school, I had a project already in mind (not involving bioluminescence), and within weeks of arriving was busy working on it. Unfortunately, it didn’t work out. So my second year I tried another project (also not involving bioluminescence) that unfortunately also didn’t work out. So at the beginning of my third year in grad school my advisor gave me a choice: I could continue working on my unsuccessful project — but in another lab! So I felt a little pressured to find a project that would work. I happened to read a book by a Japanese scientist, Dr. Makoto Omori, who was an expert on oceanic shrimps of the world. In the book was a photograph of a deep-sea shrimp that was supposed to be bioluminescent, even though no one knew why. The “why” and “how” of bioluminescence in that shrimp became the basis of my successful dissertation research. The story doesn’t end here. Years later I became friends with this same Japanese scientist, who by now was a well-known professor of oceanography in Tokyo. Turns out he was the scientific advisor of a commercial fishery based on a Japanese shrimp very similar to the one I had studied as a graduate student. My Japanese colleague had spent some 10 years trying to study bioluminescence in this shrimp but without success. He invited me to visit Japan and work with him to demonstrate that the shrimp was luminescent. To make a long story short, our very first experiments successfully showed that the shrimp was luminescent. In fact, the luminescence may be important in the shrimp’s swarming behavior, which is crucial to the success of the fisheries because the fishermen locate swarms of the shrimp using fish finders (echosounders). So I felt as though I had repaid my Japanese colleague, who had unknowingly helped me years back when I saw that picture in his book and got inspired to study bioluminescence.

What is your favorite story?

I remember going on my first submersible (small research sub) dive and just about exploding from needing to go to the bathroom after 4 hours, but I’d rather not dwell on that. Or I could talk about experiencing Hurricane Bob in the north Atlantic during 1991, when it was so rough you couldn’t sit in a chair, stand up, or even sleep. I also remember snorkeling in the Bahamas — gloriously clear water, chasing after turtles and having large jellyfish float by. Most of my time at sea has been spent studying deep-sea animals, which are normally too deep to study in their natural habitat. So we use trawl nets that we drag through the water at various depths to collect animals which we can then study in the shipboard laboratory. You never know what will be collected. Everything from exotic deep-sea fish with glowing lures, flashing lantern fish, brightly luminescent euphausiids (krill), to jellyfish so delicate they disintegrate at the slightest touch. Once we retrieved the trawl net to find it draped with the catch (attack) tentacle from a giant squid, which apparently tried to attack our trawl net (perhaps mistaking it for a whale). For some studies we retrieved the animals under dark conditions so as not to damage their eyes, which are highly light sensitive as an adaptation to the dim light environment of the deep sea. Of course this made it difficult to see the animals until we were well dark adapted. In the deep sea, the largest habitat on earth, animals have well-developed eyes not to see sunlight, which is dim or nonexistent, but to detect bioluminescence, the only source of light at these depths.

What are your favorite fish?

I have two favorites, both of which live in deep waters.

What are the positive and negative aspects of your job?

The best part of my job is that I am constantly learning new things. I think the pursuit of knowledge for its own sake is one of the most fascinating endeavors possible, and the most gratifying. I love problem solving, especially developing new instrumentation systems to do an experiment. That part is cool! Each day is different so the work is definitely not boring, although it can be very challenging. I act independently without a supervisor telling me what to do, my work schedule is flexible, and I can both do research and teach. I can be a world’s expert in my field — how many people get to say that? I am constantly challenged, never bored, and get to work with interesting people of all ages from around the world. The negative aspects of my job is that I am responsible for my work so I can’t blame anyone else if there’s a problem, I tend to work too much to try to get everything finished, there is never enough time to get things done, and it’s pretty intense to be applying for grant funding to support your salary and research. You need to be extremely motivated to be successful and that takes a lot of energy. It also takes a lot of endurance. Once while dining at an oriental restaurant I was notified that a grant proposal had been rejected for funding. My fortune cookie read, “Trying your best is not failure!” That message captured how I felt. I had done my best preparing the grant proposal and although disappointed that it wasn’t funded, I had nothing to be ashamed of. I think that trying to do your best is a good motto for how to live your life.

What do you do on a typical day?

There is no such thing as a typical day, but there are five main activities that take up much of my time: writing grant proposals, preparing manuscripts for publication, carrying out experiments, teaching, and meeting with lab members or other scientists. Any given day can consist of one or more of these activities. For example, teaching a class means doing less research, carrying out experiments sometimes takes up most of the day, and sometimes I work on a grant proposal and manuscript at the same time. It can take one month or more to prepare a grant proposal, and years to complete a manuscript, although during those times I am doing other things as well.

Which activity is most important?

There is no single activity that in itself is most important. Obtaining grant funding to support research and personnel costs is extremely important for carrying out research. But for career development, publishing papers in highly regarding scientific journals is most important. And if you are teaching, the students sure appreciate if you do a good job! During one class, in which I distributed bioluminescence materials to the students, who were captivated by the displays, I heard the comment “Best lecture ever!” Who can beat that for positive feedback.

What will your career be like in the future?

The career of a research scientist is very dynamic, with its ups and downs based on funding cycles. One thing we don’t have to worry about is boredom. Even as we work on our current projects, we are constantly developing new ideas for future projects. Thus the world of research is a cycle of present and future endeavors, always on the frontiers of knowledge. To me, this aspect of science is the most thrilling and rewarding. I have always considered the pursuit of knowledge one of the most satisfying endeavors. So if you want to know where I envision myself 10 years from now, my answer is — I have no idea!